Find this article at:
go.ncsu.edu/readext?746417
— Written By Katie Carter

What is on your fall and winter preparation list for your horse? Stockpiling hay? Establishing winter forages in your pastures? Getting blankets ready? What about deworming? Just because the temperature starts dropping, does not mean the parasites will drop off as well.

With any deworming treatment, a fecal count needs to be done first to determine parasite load and type of parasite. A fecal count is an estimate of the number of parasite eggs in a horse. Once we know the count and the type of parasite, we can treat it with the most effective dewormer to ensure we are reducing the parasite load. The important deworming season in North Carolina is September – April. During the summer months of May-August, parasite egg numbers in pastures are much lower due to the hot summer temperatures, and deworming is less of a priority.

Before starting any deworming regiment, consulting with your vet is important. They will recommend the best treatment course that will minimize parasite loads and avoid building a resistance to dewormers. 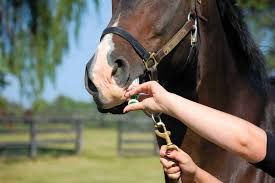 Moderate shedders (200-500 EPG) may need to be dewormed frequently throughout the year. A spring deworming can be done using Ivermectin (Equell®, Zimectrin®, Rotectin®, IverCare, etc), moxidectin (Quest®) or double-dose Fenbendazole for 5 days (Panacur® PowerPak). In late summer, Pyrantel Pamoate (Strongid paste®, TapeCare Plus®, etc), fenbendazole (Panacur®, Safe-Guard®) can be given. In early winter, Ivermectin w/ Praziquantel (Equimax®, Zimectrin Gold®) or Moxidectin with Praziquantel (Quest Plus®) can be administered.

When it comes to pregnant mares and foals that are two months old, consulting with your vet is important for proper care so they can help determine the best treatment plan.

There are other ways to lower parasite loads in horses in combination with deworming. One being rotational grazing. Rotating pastures is not only good for forage regrowth but parasite eggs that are shed in the manure are not ingested as quickly by a host and die out. Cross grazing pastures with ruminants such as cows, goats, and sheep is also effective. Parasites that are common in equine are not found in ruminants and vice-versa. In the summer months spreading or dragging manure is beneficial both for parasite reduction and spreading of nutrients found in manure over the pasture. This also keeps nutrients buildup down in high manure concentrated areas. In winter months the removal of manure is also helpful in decreasing parasite numbers. Doing these things with a parasite control program approved by your vet can keep your horse healthy all year long.

The table below is a chart of active ingredients and the parasites they target.